Adventures in Writing and Reading, Part 8

I’ve been reading a lot recently, which is good because reading lots and reading hard and reading well are, I think, key to writing better.  At the risk of seeming completely uncharacteristically up-to-date I’m going to write about a book of short stories released relatively recently (October) and which I’ve just read.  But it’s ok cos I’m going to write about something old in the same post. 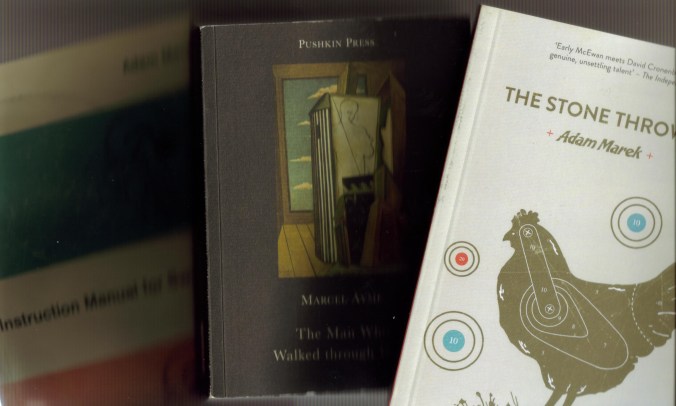 The Stone Thrower is Adam Marek’s second collection on Comma Press, and I was keen to see what he had been up to since Instruction Manual For Swallowing, which I picked up a couple of years ago.  Adam’s stories typically mix elements of sci-fi/ fantasy culture with everyday worries, as in Testicular Cancer Versus The Behemoth, from his first collection, in which a Godzilla-esque monster stomps into a city just as the main character emerges from a fateful consultation with the doctor.  Instruction Manual had some great stories but seemed a little uneven – whereas stories like The Forty Litre Monkey and Meaty’s Boys burnt themselves into my memory, some others were entertaining but too slight to really stick.

In his new book, Adam continues to build futuristic, apocalyptic worlds which are just a stone’s throw from the here and now, worlds filled with new dangers – superpowered dictators, tornadoes, earthquakes, mutated technologies and twisted ecologies.  He then has these new terrors rent ordinary families asunder, until all that matters is their impulsive reactions as they attempt to save each other.  The plots are wildly inventive, full of ideas and mysteries and his writing seems to serve this well – his sentences are packed tight with clues and little jokes, he teases the reader before they can find out what is going on.

Maybe what strikes a chord with me is that these are stories in which the world rears up to leave the reader with feelings of fragility and helplessness, unable to comprehend the forces conspiring against them.  When stories get written by myself, I find that they too are mostly about things happening to people, not people wrestling events in the direction they wanted.  I wondered for a while whether these were the kinds of stories people liked reading, and worried about it until I realised that it didn’t matter, they were the kinds of stories I was going to write.  And now I don’t think it matters.

I was struggling to identify the quality that made Adam’s new collection seem better than his debut, and eventually I realised that these stories are about more/ mean more/ matter more.  And that those are the kind of stories I have been trying to write too.

MARCEL AYMÉ: The Man Who Walked Through Walls

On a recent holiday in France I took a book by a French writer and sat in France reading the work of this French author (the book was translated into English).  The author in question was Monsieur Marcel Aymé.  Marcel Aymé was a French short story writer whose surreal tales twist time and space in unusual ways.  There’s a statue of him in Paris, in which he is emerging from a wall in the manner of the main character in his most famous story, also the title of this collection (see above).

Against the backdrop of WWII, Aymé twists time and space into new shapes and populates his stories with characters stretched and strained by the stresses of war.  This set of stories was originally published in 1943 and war is never far away from the narrative.  For example, in my favourite story here, Tickets On Time, time is rationed as part of the war effort, with farcical consequences as people begin to trade time on the black market, stretching their lives into bizarre new shapes.

A lot of Aymé’s characters should be unlikeable – they are greedy, jealous, deceptive, delusional.  But he has such a kindly way of explaining his tales and shows such compassion that I was left with the feeling that they were good people thrown into strange situations.  Like a lot of my favourite writing (e.g. Brautigan, Vonnegut) it manages to be funny and sad at the same time.

Just as Marek is doing now,  Aymé used fantasies to try to make sense of the world, representing the senselessness of war by sending time and space out of sync as well.  I would recommend both of these books to curious readers, but also to short story writers who want to carry on learning about the form and keep track of what is going on at the moment.