As someone who writes pretty much in isolation, sometimes it feels like the me that writes stories is an alter ego of the day-to-day ‘real life’ me.  (Hi, if you’re reading – hope your day is going well.  Remember to get some milk while you’re out there please).

I felt this disconnection even more after disappearing from my normal life for a week in October to attend, for the first time, a week-long Arvon course.  The course was entitled Short Stories: Towards A Collection and involved me being one of sixteen students spending five days with two tutors – the writer Michele Roberts and Jim Hinks, an editor at Comma Press (who publish Adam Marek and Hasin Blasim and lots of other great stuff).  This all took place at The Hurst, a lovely old house in the Shropshire Hills which was previously owned by the playwright John Osborne.

Without rambling on too much about it, I can tell you that it was an excellent week spent with a group of lovely and talented people.

It is difficult to explain or describe being there because it was a bubble we inhabited for a short time, and a kind of infectious mania slowly took hold – which skews my memories of the week somewhat.  Parts of each day were spent writing in workshops, then there was time to write alone and some time spent reading work aloud.  There were a lot of conversations about writing and more specifically about writing short stories – conversations I don’t usually have.  Plus, the house had a fantastic kitchen and a fantastic library, both of which we were free to enjoy.

My instinct was, of course, to take some pictures of The Hurst before I left, but then I decided against it, to keep it just in my memory.  Hopefully I will have chance to return in the not too distant future.  I did take one picture however: 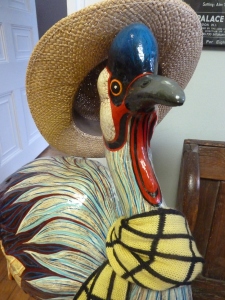 This strange ceramic bird stands in the entrance hall – a kind of totemic welcoming party.  I identified it as a cassowary, but have no idea if this is correct or not.  Nevertheless, one of my course-mates issued a challenge in response to my picture – a 500 word story about the cassowary.

Another of my course-mates, Valerie, responded with a beautifully realised little piece of work about John Osborne’s relationship with the cassowary.  Encouraged by other members of the group, she forwarded the piece to one of the coordinators of the centre.

In this blogpost, Natasha Carlish, who had welcomed us to The Hurst on the first day of our visit, published Valerie’s cassowary piece, and reflected on the challenges she had encountered in her first three years of working at Arvon.

What I liked about this blog post was Natasha’s reaction to Valerie’s sharing of her piece – it took me back to the final night of our time at the centre, in which each of us read some of our own work to the group.  There were – of course – some nerves, but slowly an event that had been approached with trepidation revealed itself to be a vital and victorious ending to our little week-old community.

In short, it reminded me about why we share stories – to try and make connections between our own separate realities.

Are these short stories or a novel? Nobody seems quite sure what it is, so I think it would be best to just categorise under bloody good writing. Reflecting the rhythm of idle thoughts, these tales – or tale – of a young woman living alone in a house in Ireland is a peaceful read, not a difficult read, but all the more thought-provoking for it. Strange, new, beautiful.

My Documents by Alejandro Zambra

The title of this collection refers, of course, to the name of the file on a personal computer and, fittingly, this is a selection of what feel like quite autobiographical stories. Computers play a part in a number of these stories too – for example one tells the story of the human protagonist but only over the lifespan of a certain computer he owned. Zambra writes with a confident, unshowy style which leaves you wondering quite why you are enjoying reading him, though it is clear you are enjoying reading him – maybe because of his honesty and his insight, little poetic touches.

For Esme—With Love and Squalor, and Other Stories by J.D. Salinger

I read a lot of Salinger this summer – pretty much everything that isn’t ‘The Catcher In The Rye’ – and found that pretty much all of it is pretty great. My favourite of his short novels about the fictional Glass family was ‘Raise High The Roofbeam, Carpenters’, in which Buddy Glass finds himself in an awkward situation at a wedding gone wrong.

The first story in this collection is ‘A Perfect Day For Bananafish’, which features Seymour Glass – subject of much hero worship in the other Glass stories. This seems to be Salinger’s most famous short piece, but the two I want to concentrate on are the titular piece and one called ‘Just Before The War With The Eskimos.’

The appeal of that second story is difficult to explain – it revolves around some chance encounters which Salinger shows us, and whilst not a lot happens, so much is hinted at. It feels like we are seeing just a small portion of these characters’ lives and that the references they make and the things that seem important to them are intriguing.

The story ‘For Esme – With Love And Squalor’ is a miniature masterpiece in two parts. In the first, an American soldier stationed in England during the war is engaged in conversation by a teenage girl, for whom he promises to write a story. As they part, she tells him: “I hope you return from the war with all your faculties intact.”

Inevitably, when we catch up with the narrator again, the war is over but his faculties are not intact. This, he explains, is the squalid part of the story. Between the two halves, it encapsulates so much of Salingers work – gentle encounters, with a sense that crisis always awaits around the corner.

For reasons that must only be commercial, novels are expected to last around 250-300 pages and so short story collections seem to have to be about the same size, which is ridiculous and a shame because they should just be as long as they need to be. And if this had been about 150 pages long it would have been perfect because there are that many fantastic pieces of writing here, but then there’s some that just aren’t as good and it distracts from the great stuff. The titular piece, which won the BBC National Short Story Award, is a poetic, intense, funny tale of life, illness and death, and stands out as a highlight.

I kept getting told to read Carver and eventually I gave in and got a copy of What We Talk About When We Talk About Love. This is a set of spare, terse little encounters which nevertheless do not have the air of careful cultivation you might expect from something so minimal. These moments feel very real – none of the characters are happy, quite, they are just trying to get by, none of the endings are happy either, but then they don’t feel like endings. Clearly life will continue once the story ends.

No One Belongs Here More Than You by Miranda July

These stories are bright, funny, weird – like tales told by a high school friend when you catch up with her years later and she is just as odd as she ever was. E.g. ‘Majesty’, in which the protagonist’s dream of an encounter with Prince William has a profound effect on her. She describes, “that day I carried the dream around like a full glass of water, moving gracefully so I would not lose any of it.” She imagines that the best way to meet him would be through her role as an earthquake safety expert. “Last year a little boy asked me what made me the expert, and I was honest with him. I told him I was more afraid of earthquakes than any person I know.”

View all my reviews

Halfway through, what it becomes is a block of rough grey on a pale yellow background, but then it swirls away to get made – through some invisible process – in to a neat new suit.  “It needs taking in, just a little.”  “How long will that take?”  “Only a few days, call in at the end of the week.”  Adverts for running shoes and running kit and running and running and the joys of running.  A little plastic figurine popped out of a packet, played with, lost in the sand, eaten by the sea, bon voyage, bon apetit.  The pleasure of writing things down, tippy tappy tippy tappy, getting somewhere.  A block of rough grey on a pale yellow background.  A neat new suit.  “No, I would say that fits you perfectly.”  “Perfect.”  The calm rolling in of the year like a ball in to the pocket of a snooker table.  No ending where there’s supposed to be an ending.  An elbow jigged, a drink spilled, a stain slapped across a sleeve.  “Oh, I’m-“  “It’s nobody’s fault.”  Still.  Feet pounding, running, running, the joys of running.  A rough little shape, hard and difficult, lodged, impossible to get to go anywhere.