I like making books.  And I like making envelopes.  I also sometimes write things down on tiny bits of paper and then have to find somewhere to stick them so they don’t get lost.  On top of all that, I sometimes like to cut things out of newspapers or magazines and these cuttings form little piles which I fall over when I get up in the middle of the night to write something down on a small piece of paper.

Something had to be done to solve all of these problems (and the envelope-making is a problem because I probably have over a hundred unused handmade envelopes sitting around and it is getting ridiculous), and so behold the Envelope Book Thing.  That’s what I’m calling it.

It is a hardback book in which all of the pages are envelopes, bound together to form a handy stuff-keeping recepticle.  I used envelopes which I had made from a variety of sources – magazines, old calendars etc. – which gives the book a bright and jumbled look.  In order of appearance, the envelopes depict: Scout Niblett, Alan Moore, Beth Ditto, the Hitcher from the Mighty Boosh, Willow from Buffy the Vampire Slayer, a Roy Lichenstein illustration, an illustration of a war demonstration, He-Man, Hiro from Heroes and a picture of garish 1970s living room.  I think that if I make another one of these it might be themed but as a first go I just used a random selection.  The paper used for both the cover and as endpapers is from a Green Stack of recycled papers from DCWV, which some kind people gave me for my birthday.

Enough waffle, here are some pictures: 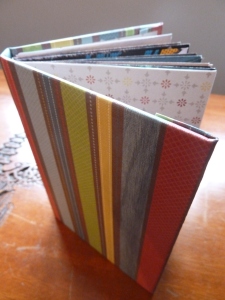 That’s how it looks, but how does it feel?  Well, I’m quite happy with it, though I think it is a bit too tight – it doesn’t quite open the way I would like it to.  And it may be a touch wonky.  As I plan to use this myself I’m not too worried but its something I will have to sort out if I make more.

Here are some picturres of a book I made recently, a kind of mini map of Guernsey made from an old big map of Guernsey.  I bound sections of it – mainly bits of the coast – together with tracing paper as I had some vague idea that this would allow someone to trace around Guernsey.

This was the first bit of binding I had done in ages and I’m not entirely sure it worked.  I’m not entirely happy with the cover and I’m not quite sure what I’ll do with it.  Still, it got me back in practice and I’ve got some other ideas for books which I’m hoping to try out soon.

END_OF_DOCUMENT_TOKEN_TO_BE_REPLACED

Because I enjoyed making my first atlas so much I decided to make a second one.  This one slightly bigger, as demonstrated here with a biro.  The book is small, the biro is far away.

Thanks to Zan for the snazzy material which I used to cover the book.  Is snazzy a real word or some kind of strange ninetiesism?  Anyway.

This morning I decided to make a tiny atlas because atlases in general are too large and too sensibly put together. 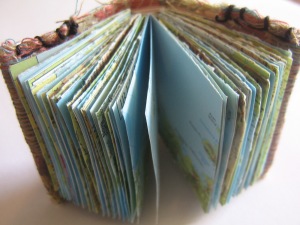 I butchered up the maps from the back of an old diary and stitched them together in what I thought was a better order.  In the pictures it looks more pink than it actually looks in real life.

Here I have taken a picture of it next to a shoe to give you some idea of its true size.  That is one massive shoe!

It looks a bit red and scary in those photos but it is a very nice book really.  Um

New and improved version of one of my first binding attempts. 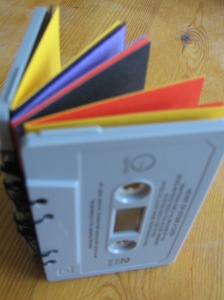 The tape is ‘Heart Of Stone’ by Cher in case anyone is interested.  I bought it from the charity shop and sent it straight for slaughter.  Afterwards I realised that perhaps I should have listened to it.

Actually I think it might have been on the other side of the home taped cassette of Meat Loaf’s ‘Bat Out Of Hell’ that my parents had and which we listened to on many a long car journey (the Meat Loaf side anyway, I don’t remember us listening to the Cher side).

Since about this time last year I have developed something of an obsession with creating envelopes out of old bits of paper, things from magazines, calendars etc etc…  I have now amassed a stupidly large number of them and hopefully I’m going to find someway/where of selling them in the near future.  We’ll see.  Otherwise I’m just going to drown in a big ol’ sea of envelopes.  These aren’t the best pictures but here you go for the gist: 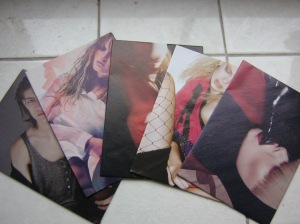 This was another book I made back in November but as it was for a friend’s birthday I didn’t post a picture of it straight away.

And then I forgot for a bit…